I got bit on the ass by one of my puggles today. I got
caught in the crossfire trying to break up the fight. Needless to
say, let’s get this new year started right!!

happy holidaze ya’ll! may your days be big and bright and your nights be dark and mysterious! merry christmas, happy hanukkah and all that jazz… 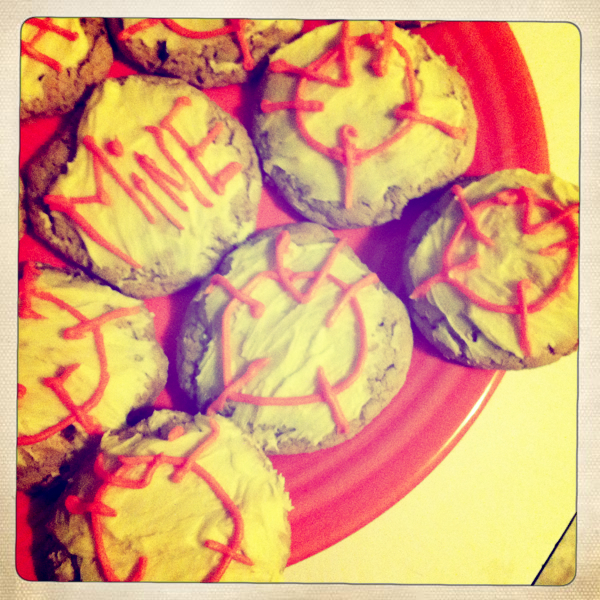 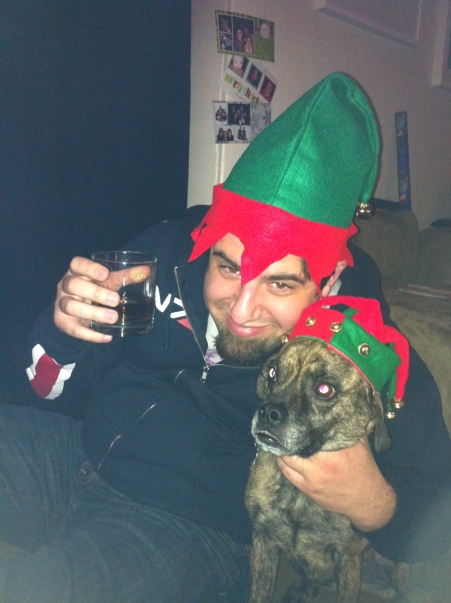 the elves: josh and helo 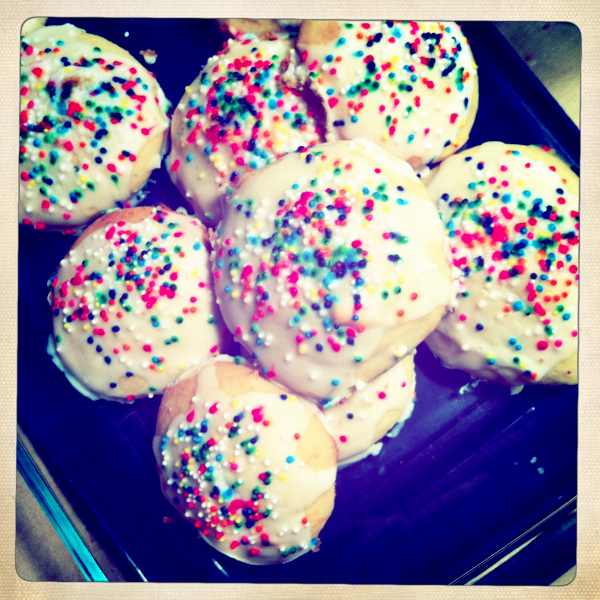 may the force be with your holiday glow and watch a plenty.

my version of seafood salad minus the conch (i threw in two, and only two pieces of tentacle in honor of rissa). 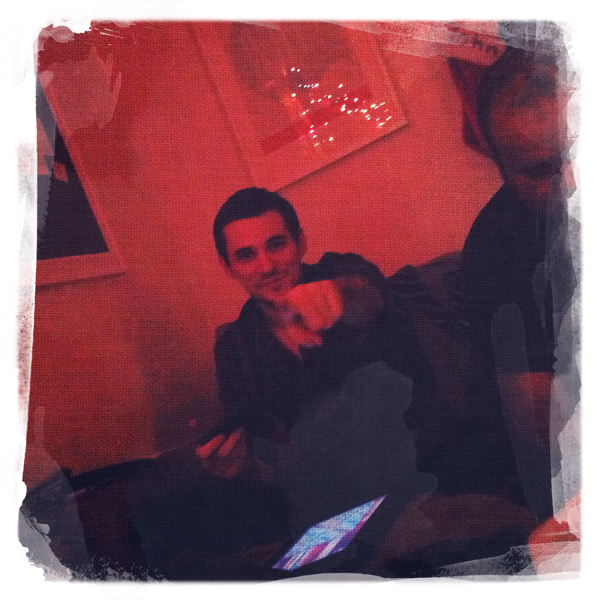 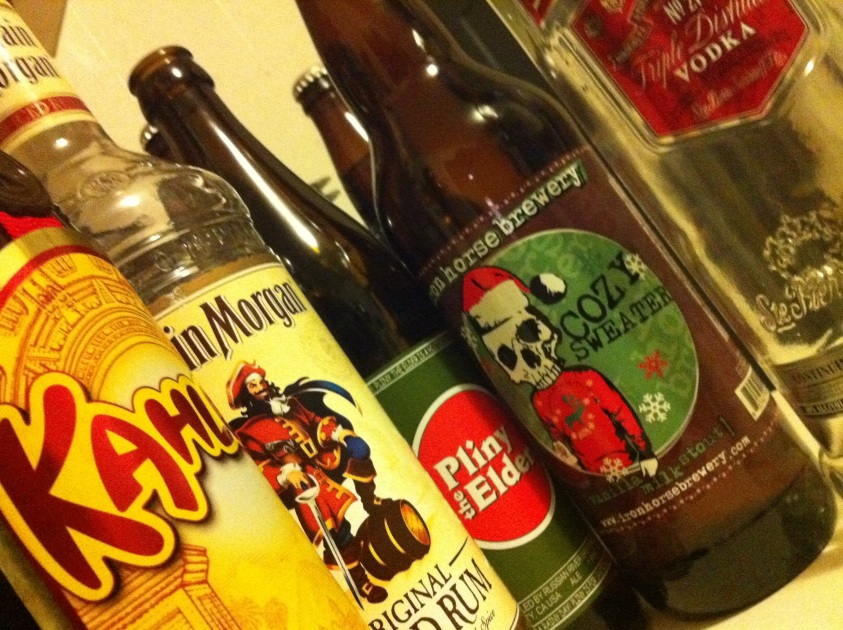 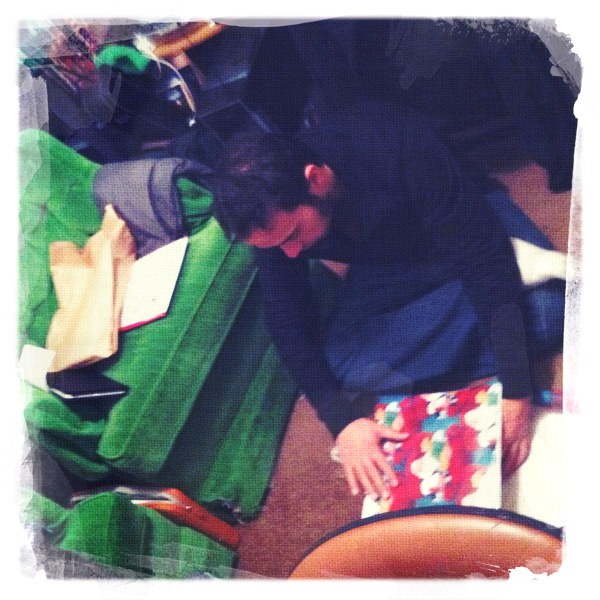 a very merry, merry christmas to you!

where the music matters! i know, i know… i can stream kexp on the interwebs but it’s a whole other ballgame being able to listen to it in my car. i love it. i support it. did i mention that i love it? some of my favorite dj’s are cheryl waters, quilty 3000, and kevin cole. i recommend a listen and you will be happy you did! the station is listener supported, so show some love and donate. oh, there is also a free iphone app!

also, kexp has thousands of performances on youtube. the quality is ahhhhmazing!

it finally feels like christmas time for me. FINALLY. it took awhile living in a different state and not seeing my parents, sisters, cousins, nieces, nephews, aunts and ….you get the point. but everyone gets older and traditions tend to change over the years. we are not spending the holidays with michael’s family or mine, but are staying in town this year due to using up our vacation days with the move.

we live in a cool, little house in greenlake but i stress LITTLE. i didn’t think we had room for a tree, but decided it is necessary. it is the life blood of christmas afterall! as soon as the noble fir was brought inside, the piney smell wafted through the house and it was starting to seem like christmas. the family gifts are wrapped and ready to ship and am chillin with a low budget film made by the flaming lips titled ‘christmas on mars.’ if you know this band (who doesn’t?!?!?) then you know to expect the unexpected. the plot is kinda non-existent and hard to follow, but the special effects are oddly amazing and the soundtrack by the flaming lips is the best part. you might notice some familiar faces like adam goldberg, fred armisen (snl), isaac brock (modest mouse) and steve burns (blue’s clues). this film is for fans of the flaming lips, avant-garde style films, and cheesy sci-fi. i love to listen to wayne coyne speak. if you do too, watch the extras and rent the music documentary ‘the fearless freaks.’ 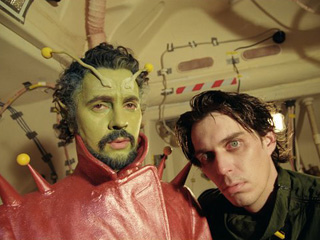 and of course, wayne can’t go without showing his wife in her underwear. if you follow him on twitter, than you know what i mean. @waynecoyne

the flaming lips also made my list of best live shows of 2010.

trash kit (formed in 2008) are rachel a, rachel h and ros m, from london, uk. the two rachels also play in the madrigals, and ros plays in ray rumours. mixing chaos and trippy melody in equal measure, trash kit are as jubliant as they are focused. vocals tangle with each other and highly expressive drum patterns, while guitar lines make for a serious adventure into the realms of party. so far they have a cd-r, which keeps selling out at shows, an lp out now on upset the rhythm and a forthcoming split 7” with woolf on milk records. last.fm

willy wonka in smell-o-vision by SIFF!

i love gene wilder! blazing saddles is the reason for that (mostly b/c of my father’s influence…i can recite most of the film by heart). but anyhoo, siff cinema has awesomely come out with this annual weekend full of willy wonka sing-a-long, sniff-a-long and taste-a-long views of this stellar classic. while most everyone, even those under the age of ten, have seen this classic numerous times… it was still as exciting as seeing it for the first time…and i have no idea when my first time actually was but long live gene wilder!!

it is not your typical pop culture trivia but rad themes like back to the future, 30 rock, star wars, buffy the vampire slayer, venture brothers and even sex and the city.

i received a delicious treat in the mail from a sweet friend back home (thanks ASH!). and omg, yummmm! chocolate truffles from dude, sweet chocolate made with rahr ugly pug black lager (which is so good on its own)! i was waiting for michael to get back in town to share them but that didn’t work out. i noshed on a few and they were pretty damn good. i would have eaten more but that would mean more time spent at the boring gym. don’t worry, i saved enough for the boy to get a taste, minus that last one i just snacked on…

go. order. chocolate. now! but i think the rahr truffles are no longer available. although fungus amongus and crack in a box will be going on my wishpot list! i’m craving a tasty rahr brew now to wash down that truffle and am missing texas a little bit.

i love, love, love this beatles giclée print by max dalton! oh, will you buy it for me?? pretty please?

yay! december is here. i am still waiting for my holiday spirit to kick in. has it hit you yet? well, check this out. it is probably not good to watch if you are prone to seizures or can’t stand the band slayer. enjoy!